When it comes to  learning a language , your own effort has a lot to say. Whether you are self-studying like me or you have a teacher and school provided materials, nobody is as responsible for your learning as you are. I have always known this and I take a lot of pride in doing my best. I enjoy learning. Teaching on the other hand.. Well, I guess it simply isn’t my cup of tea. I like to help people when they need it but I hate correcting peoples mistakes. Absolutely hate it. Do you want to know just how much I hate it?
When my boyfriend and I moved to our first home the neighbor thought my name was Marlene. Cammilla and Marlene isn’t exactly similar but nevertheless she somehow came to the conclusion that Marlene was my name. I corrected her twice on the very first day of moving in, and then I gave up. More than 5 years have now passed and my name is still Marlene. Needless to say, I started reacting to the name a long time ago.
Could you imagine me as a teacher? Oh god even thinking about it makes me cringe.! Oddly enough, I don’t seem to have problem correcting physical mistakes. When my new coworkers make mistakes I correct them without any problem. I wonder why my brain differentiates between those types of corrections.

I hate doing language exchanges because that involves me correcting people. I always feel more relaxed when the conversation is completely in korean because that way I’m the one getting corrected. Despite hating to correct people I still generally do it. As a learner myself I know how frustrating it is to learn something incorrect. Have you ever been corrected on something that you know for sure that you’ve said a million times before, and then wondered why the hell nobody corrected you from the beginning? By the time it got corrected it had turned into a habit for you to say it the wrong way and now you find it a lot more difficult to learn it properly. You’re left with incorrect knowledge, feeling like a complete idiot – It straight up sucks. I avoid situations that involves me correcting people, but when a correction is actually needed, I will be correcting.

I never put too much thought into this as it just seemed like logical thinking to me and I still have the mindset that you yourself need to take responsibility for your learning. However, recently I realized exactly how badly people can sabotage other peoples learning. I saw a married couple in the store I work at, and the woman was desperately trying to learn Danish, while her Danish husband kept using English when talking to her. She kept talking to us in Danish and we answered back in simple Danish. She walked around asking about the names of different items in the store. She was trying so hard and her husband completely ignored her efforts, leaving her with a constant discouraged look on her face. Even when she passed him some tissue paper, he thanked her using English. Dude! Just give her a simple Danish Tak! He later stated that he didn’t have the right temper to teach her and that it wasn’t his job anyway, since she was taking a class.. Excuse me? What the hell is wrong with you?

Nobody is as responsible for your learning as you are – but other peoples help (or lack of help) can make a huge difference in you learning and in your motivation to keep learning. Not correcting my name might not be that big of a deal, but the whole ‘Oh I don’t mind so I’ll just let it go / it’s not my job so I’ll ignore it’ mindset , is simply no good. It might not make a difference to you but it probably does to the other person. Let’s not be like that guys. Let’s all become better at helping people.

To lighten up my sudden bad mood, I’ll just leave this here! 🙂 – At least I’m not the only one with name correction issues! 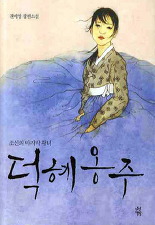 Now that I have gotten back into my study habits again I have been trying to decide which story books and study books I should add to my schedule. It wasn’t really a problem to pick out the study books but I couldn’t decide on a story book, despite having 5  great books to choose from. Don’t you guys know that feeling of having some books or movies that you truly love and enjoy, but sometimes it’s just not the right time for them to shine? Anyway, my boyfriend then bought me a tablet yesterday because he wanted to make it easier for me to study on the go despite my busy schedule. He said that he wanted me to have a loyal studybuddy (isn’t that the cutest thought ever?). While setting up my new studybuddy​, I made a list of useful apps and started downloading and logging in to all of then, and when I opened the Ridibooks app, the first book that showed up was 덕혜옹주.

As many of you guys know I started reading 덕혜옹주 last year around summertime and because it’s quite a difficult book it took me ages to just read a single page. After reading the prologue and the first two chapters I was in desperate need of a break. Generally speaking, I have a tendency to study with materials that are way over my level. I have always done that and to be honest I kinda like it that way. When feeling somewhat lost I automatically pay better attention, have a stronger focus and feel way more motivated. I know that most people feel the opposite but then again, we’re all different – and thank god for that! Nevertheless this book just happened to be a tad too much over my level. It was to the point where I couldn’t even figure out whether something was a difficult old word or a weird old name. Do you have any idea how frustrating it is when you spend ages on finding the meaning of a word without any luck, just to later discover that it was a name? (Thanks Jeannie! It you hadn’t told me back then, I would still be lost lol) Oh god even just thinking about it makes me all frustrated!

When I decided that it was time to take a break from reading it, I promised myself that it really just was going to be a break. I didn’t want to give up. However I quickly forgot all about it and now 10 months have passed. I feel ready and motivated to end my break and give it another chance. Maybe I’ll finish it, or maybe I’ll read 3 more chapters and then need another break. I have no idea, but I do know that I still want to complete it and even thought this last year haven’t been the most consistent year when it comes to studying, I know that my abilities have improved so maybe it’ll feel less difficult this time. I began reading the 3rd chapter yesterday and once I have read a bit more and gotten an idea about how difficult it is, then I’ll add some reading goals to my new study schedule.

Challenges doesn’t always work out like you want them to, but that doesn’t mean that you failed them. I challenge you all to pick up one of your own old challenges. Maybe it’ll be easier now 🙂

Finding myself via languages

Pieces of a Danish girl's daily life in Korea

The latest news on WordPress.com and the WordPress community.